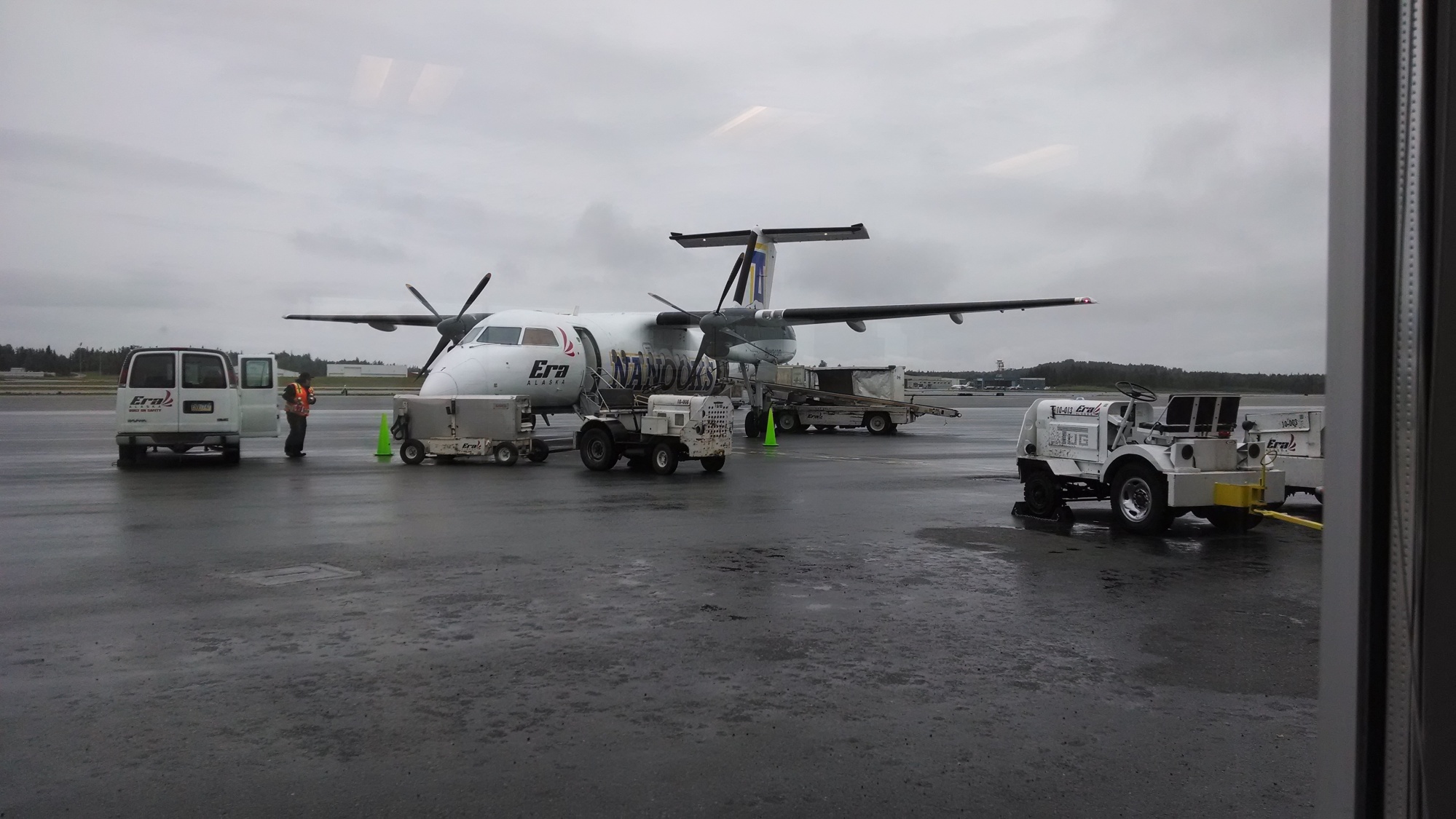 This is the plane that we took from Anchorage to the hub town of Bethel. I’m actually watching them load my bright orange luggage on now.

This was unique because we had to check all our bags except for our backpacks, tell the check in clerk how much we weighed, and then we didn’t have to go through security. Of course we didn’t know this and got in line. The TSA agent checking boarding passes informed us that we were welcome to go through security, but it was unnecessary. We were pointed down a long hallway on the other end of the terminal, and found the small gates for each of the regional airlines.

It was akin to stepping back in time, to a place where people could trust one another, and air travel was much simpler.

We had a bunch of things on our to-do list for our three day stay in the city and shopping for groceries was a big item to check off our list.
We decided to stop for a couple of days in Anchorage before we flew all the way out to Bethel and then subsequently our village. We were fortunate enough to have friends in the city that we could stay with for the weekend, because hotel prices are really high, or shady hostel-like conditions. Arriving at 1:30am we took a cab to our friend’s house and then back to the airport to pick up our rental car in the morning when Avis opened. Anchorage isn’t really a town you can get around on with public transit, we planned on getting a lot of groceries, and had about 80lbs of luggage to hang onto until we could check it on our next flight.

Shopping was more stressful than I had anticipated. I planned on doing a bush order from Walmart- I had heard that you just took your shopping cart to the bush order desk and they added a flat fee of 10% onto the bill plus postage. When we got to the Walmart I headed over to customer service, and found that the guy there didn’t know anything about bush orders and said he didn’t do them. There was a sign with a phone number so I called them and got connected with the bush order department all the way down in Ketchikan (in the south east down past Juneau). After talking with the guy on the phone he told me it was just him in the bush department and I could just tell him what I wanted over the phone and it could be processed. The idea of buying all of our start up groceries without seeing them myself stressed me out even more, so we decided to go to plan B and head to Sam’s Club, buy things in bulk and ship them out ourselves. 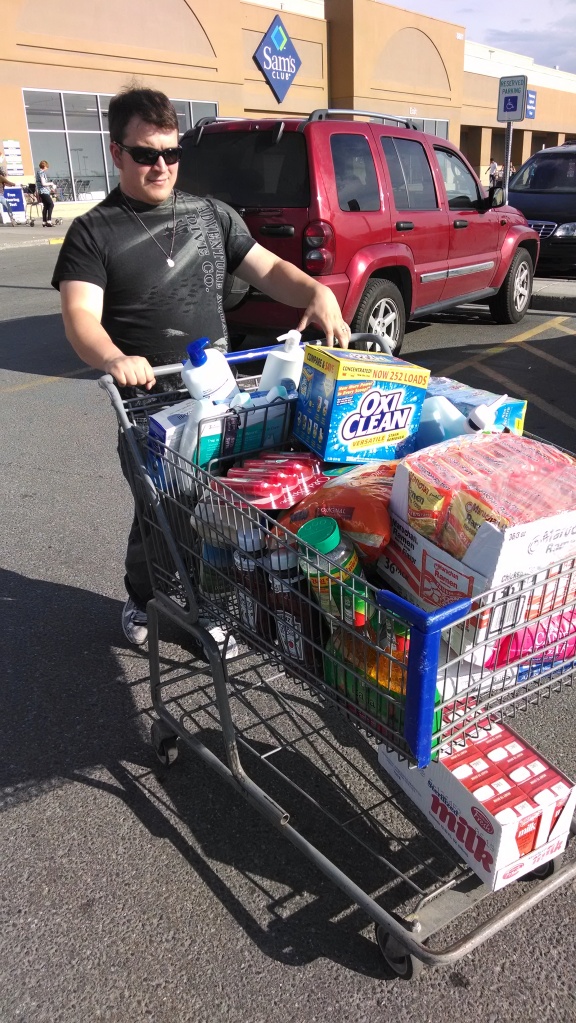 Nathan with the Cart from Sam’s Club- Yay for bulk shopping!

It turns out that there are multiple Walmarts in Anchorage and we just were at the wrong one for bush orders. The one in the Diamond Plaza does let you shop the way I had heard. In the end it worked out okay though because by shopping at Sam’s Club I could buy in bulk and that saved me money. It also forced me to get a membership. Now I should be able to do bulk bush orders with them over the phone.

Overall we spent about $700 in bulk groceries and personal care toiletries, etc. The hope is that these will last us until Christmas. It isn’t an exact science, and I tried to plan the best I could but it is hard to judge exactly what we will need because I haven’t ever had to cook every meal at home before. Nathan and I fell into bad habits of just going out to eat when I didn’t feel like cooking, or when traveling between jobs. That time is definitely in the past now; I don’t have the excuse of working multiple jobs that’s for sure!

Just to be safe because we are getting close to the limits on the credit cards, we bought some gift cards at Sam’s Club. I could use my store credit card to buy these, so essentially just borrowing cash against a card that I wouldn’t have been able to use anywhere else. This experience has been so much more expensive than I originally thought, and we haven’t had a full paycheck in about three weeks. Nathan gets his signing bonus when we arrive, but it has essentially already been spent. I can budget and make it work, but things are tight.

It was then time to pack all of our purchases into totes again and take them to the post office. 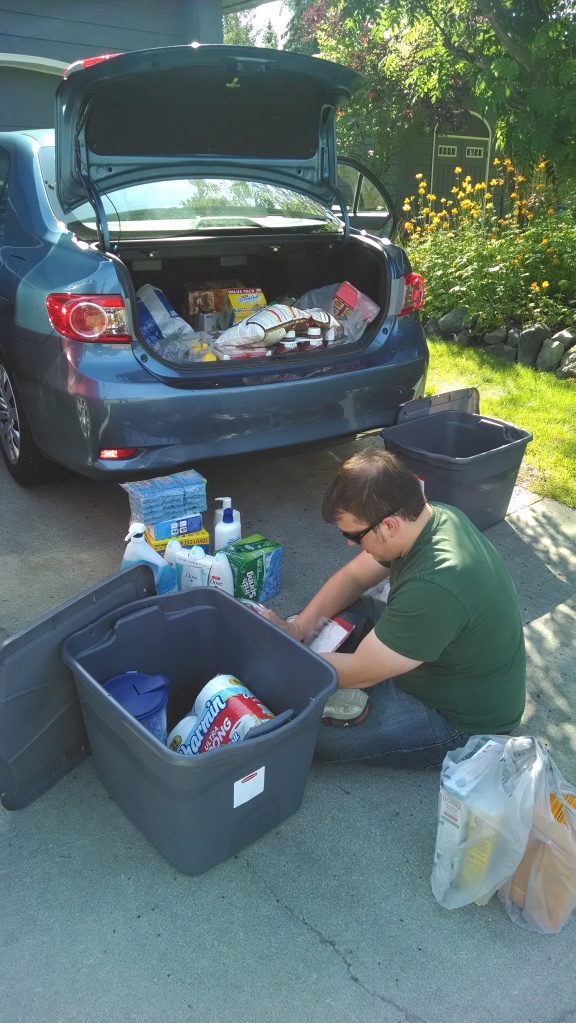 Packing up our Shopping goods in Anchorage.

The best thing I found out was that there is a post office by the airport (on Postmark Drive) in Anchorage that is open Every. Single. Day. Until like 11pm. That is amazing. We had finally hit on some luck, in the fact that we didn’t have to scramble on Friday night to get packed and arrive during limited Saturday morning hours.

This ended up serving us very well. A word to anyone attempting this move- liquids weigh so much more than you would think. A large bottle of shampoo is about 4.5lbs, and takes up very little space. So you end up packing a lot of weight into a much smaller space then when shipping things like clothing or small kitchen stuff. Of all of the totes we had shipped previously we hadn’t really come too close to the weight limit of 70lbs the USPS set. Even with 27 gallon totes we were underweight, so I thought it was almost impossible to hit the weight limit in the 18 gallon ones. How wrong I was. We had four totes total that we brought to the post office on our first trip, and only one of them was under 70lbs. Our heaviest was 96lbs! The other two were only 1.5lbs overweight, so we left to re-pack and figure it out.
Buying another tote and dividing up the purchases solved our problem. We were also able to send out our winter boots this way. The post office guys laughed at me as I cheered when each tote came in under the 70lb limit on our second attempt. They were really good humored, and asked us all about where we were going and guessed correctly that Nathan was a teacher. All in all we paid about $100 to ship all 5 totes that were around 60-66lbs a piece. So if you have been reading from the beginning you can see how much cheaper it was to ship from Anchorage- this was a big relief this far in the game. The estimated arrival day for our boxes is Wednesday which is great news because that is the day we will arrive in the village after orientation. Of course everything is weather permitting out here, but we will keep our fingers crossed.

Now the only groceries left to buy will be some fresh vegetables/fruits and frozen meat to get us started in Bethel. 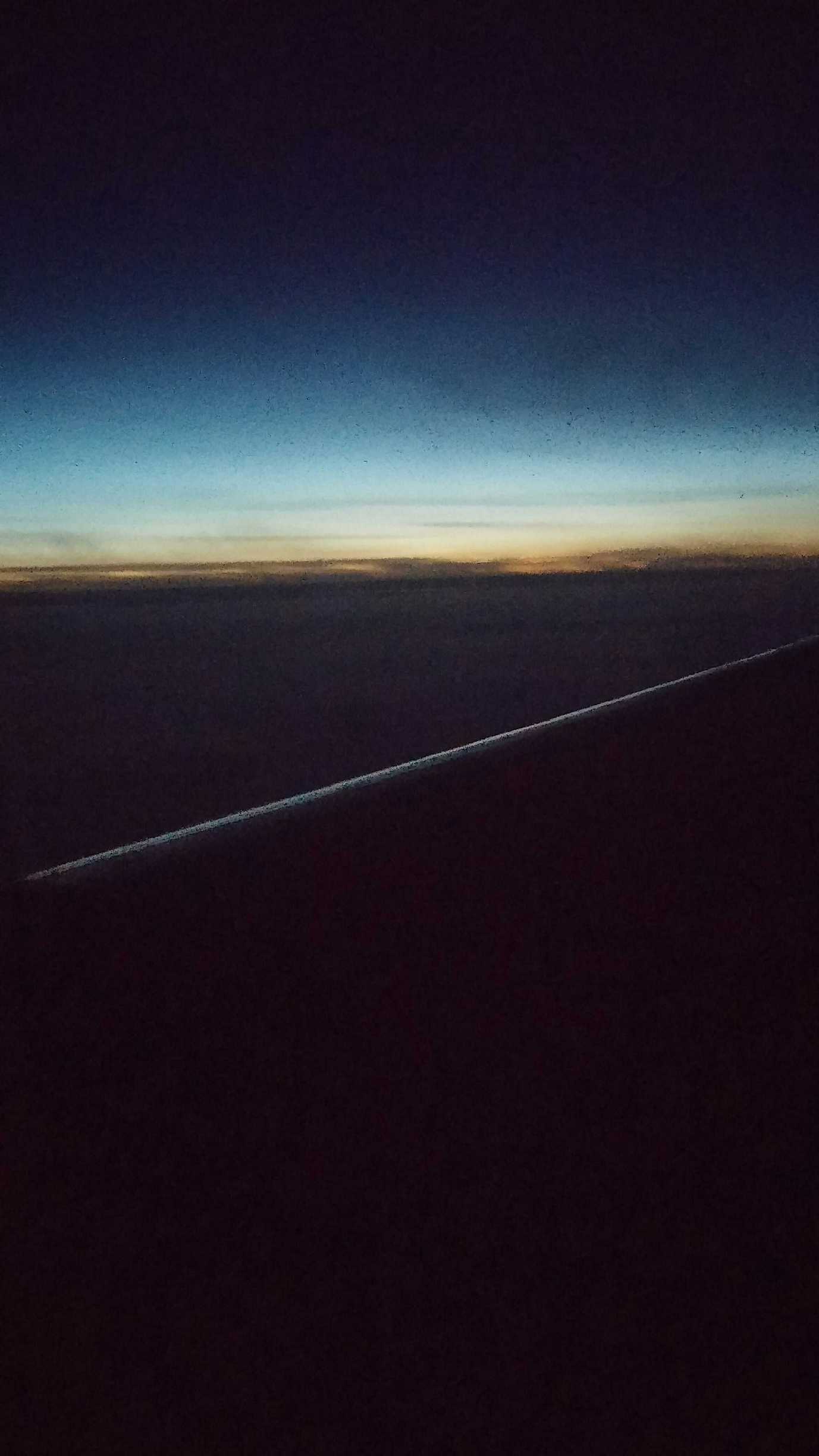 Sunlight over the wing of our plane on the way to Anchorage: approximately 12:30 pm

After leaving Chicago, we were on our longest flight to Seattle. It was interesting to find about 5 other groups were on their way up to Anchorage as well. Some were visiting family in nearby Wasilla while another group was heading down to Kodiak for a fishing trip.

We took off at about 7:30, delayed a bit by a snafu with a mysteriously wet seat in front of us. The poor guy who was supposed to sit there kept being shuffled around while the airlines looked for a new cushion. The passenger sitting next to the wet seat accidentally touched it, and caused a big to do about having to go wash his hands, and needing to bathe in sanitizer. We all just hope that it was water. Eventually someone from the airline was able to find a spare cushion, the last passenger was seated, and we were on our way.

This hadn’t been the first odd flight delay on our trip however. On the first flight we smelled something rotten. No one really wanted to say anything; I’m assuming that others like me were just thinking that they had the unfortunate luck to be seated near someone with less than ideal hygiene. However when I looked over towards the aisle I saw what appeared to be some smoke in rising from the vent in the floor that was causing the smell. This alarmed both myself and the woman across the aisle, so Nathan flagged down the flight attendant. When we asked if that was normal, she said “No” and went to grab the captain of the plane. The captain came back quietly so as not to cause any alarm and checked out the situation. After walking back and forth a couple of times she informed us that the smoke was just some condensation burning off because of the heat. That answer didn’t seem to account for the smell, but it was dissipating, and we all agreed that if that captain didn’t seem concerned, neither should we.

Needless to say the flight was uneventful.

The final flight of the trip was from Seattle to Anchorage. We had just enough time at Sea-Tac to board the train to the north terminal, use a bathroom and board. There was a good sized group of us headed in the same direction, so it was easy to find our way with so many eyes looking out for the right path.

The sun had already set in Seattle when we were taxing for takeoff, and all of the lights glittering below were beautiful. I have been in this airport twice now, and never seen the sun. Heading north though, we were chasing the sun as we had been all day- traveling back in time. It was incredible to look out the window at cruising altitude about two hours into the flight and see the pink glow on the horizon. The sun was setting on the sea just south of Alaska. By the time we touched down in Anchorage at 1:30am it was dark again.

More than 20 hours after we left my childhood home that morning we had our baggage and were tucked in safely at the home of friends here in Anchorage. One of our longest travel days was finally over.