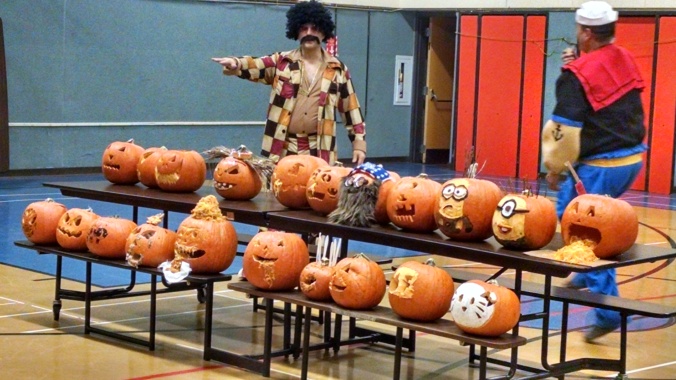 Pumpkin Carving Contest at the School!

The week of Halloween was very exciting here in Napaskiak. I was subbing the whole week for a class of 9 fourth graders who were simply wonderful, and I got to enjoy all the fun activities happening over at the school. On Wednesday night there was a carnival for the community. Various student groups as well as groups like the church from the community set up games or booths in the gym. Lots of people came to support and have fun! Nathan was in the sponge toss where kids could pay to throw a wet sponge at various teachers, and the principal. 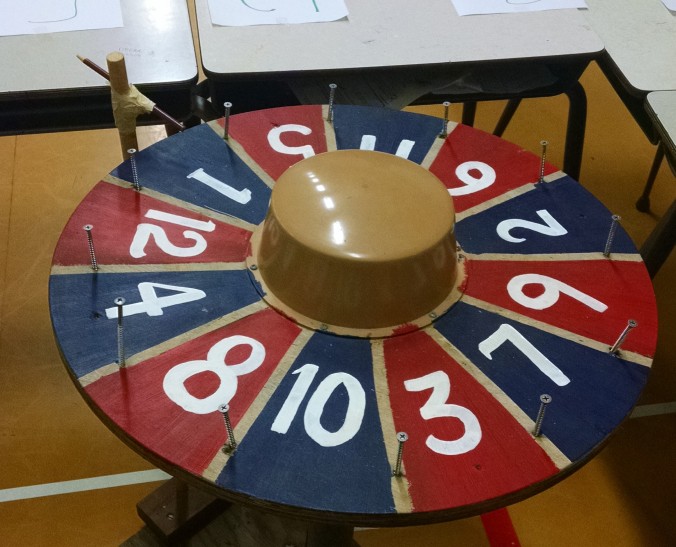 The Wheel of Fortune! (with a lovely colored pencil for the pointer!)

I found it interesting that the people who complained the most that night about losing were the adults! The kids loved it, and I had lots of fun announcing the games and getting people excited to play. It brought me right back to my days working at Sylvan Beach Amusement Park as a kid.

Thursday of Halloween week brought us to pumpkin carving in class. I printed out a pumpkin template and had the kids design two or three ideas each. They then voted on the ones that they liked the best for the two pumpkins the class had been given. Pumpkins are extremely expensive out here, because you can’t grow them on the tundra, so they have to be shipped in. I love that the school provided pumpkins for every class K-12 so that the kids don’t have to miss out on this great American tradition. 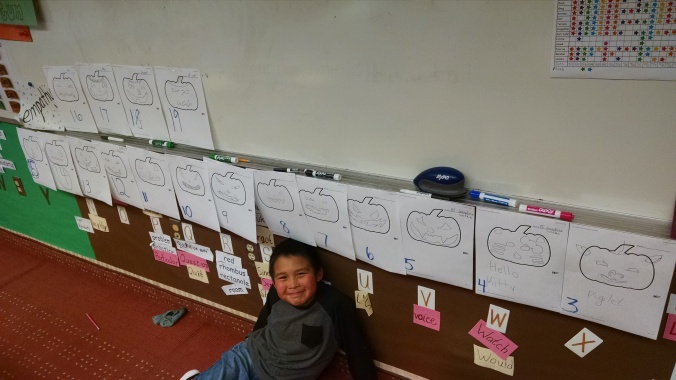 The kids voted to carve a Hello Kitty pumpkin (the girls were thrilled) and a Puking pumpkin that had been stabbed (this pleased the boys to no end) so in the end, everyone was happy. I didn’t trust the 4th graders to use the knife, even though a lot of them have experience with preparing animals and such after hunting, so we divided the labor- I would carve each design that they wanted, and they got to pull out the ‘guts and brains’ while separating the seeds that I would then cook for the next day. They seemed more than okay with this division of labor, and in the end, our pumpkins looked great:

Although we did not win the Jack-o-lantern contest the next day (Nathan’s class did though so that was exciting) it was great to see them all excited about the hard work, and all the creative designs that the kids in school had come up with.

In addition to the jack-o-lantern contest, Friday being Halloween, students and teachers alike all donned their costumes before coming to school. Fridays are half days for the students here (with teacher professional development in the afternoon) so during the hour they normally would do traditional Yupik dancing, an assembly was held in the gym. Each grade level showed off their costumes, and even the kids who were too young to be in school came in and paraded around.

The itty-bitites and their costumes! They were so adorable!!

I dressed up as a Lady in Waiting, and Nathan was Frodo Baggins from LotR. Both having theatre backgrounds we enjoyed dressing up very much. And a shout out to my awesome mother for making some key pieces in these costumes! (My whole outfit, and Frodo’s vest and cloak)

Trick or Treating started at 3pm on either end of the village. The kids met up with the Village Public Safety Officers (VPSO’s) and went house to house in two big groups. Nathan and I headed to the Principals house, which is a part of the old school building, to work on their haunted house. I gave out candy to the kids who then either chose the ‘scary’ or ‘not scary’ routes out of the house. It was a whole lot of fun and in the end we had a lot of candy left over because we had combined three families worth to give out, so Nathan and I are set until Christmas!

It was exciting to be done with the holiday by 6:30pm. There was a dance later that night from 8:30 – 11 but I was so exhausted from the past two weeks that I wanted to just come home, get into my pj’s and read. Overall, I had a lot of fun, and am already starting to think about costumes for next year!

Have something to say? Write it here! Cancel reply