You don’t realize how much the area you grow up in influences your life until you move away. I have lived, however briefly, in many parts of the county, but I always find myself comparing it to life in small-town Central New York. Even in Alaska, I was comparing the cold (way colder in AK), and the snowfall (much less in AK because a lack of Lake Effect) to what it was like where I grew up.

Of course, most people do this. I remember talking with our neighbor in Napaskiak about her first winter with snow. She had never seen it in person, having grown up in Puerto Rico. I love meeting people who have lived such different experiences than myself.

Having a son now, I spend a lot of time thinking about how the choices my husband and I make will effect how he sees the world. I want him to have the pieces of childhood that stick out in my memory so positively. Playing outside until we couldn’t see, dancing with fire flies, stargazing in the fields around town. But I also want to have better access to things I didn’t: live theatre, museums, and other amenities that come with a more urban life. That’s really how we came to decide on moving to the Roanoke Valley. It seems like a great blend of country living with city amenities.

The city itself is green and beautiful, nothing like the concrete cities in the North.   Now, it is much smaller than Philadelphia where we used to live, so maybe it isn’t a fair comparison, but it is certainly much more my speed. And I appreciate being able to get places downtown in less than and hour. Traffic in Philly was killer if you wanted to live anywhere outside city limits.

And while the arts scene in Roanoke doesn’t boast nearly the options that we had in Philadelphia, it certainly isn’t hurting either. Everywhere you look there is art, and opportunities and support for art. That is so exciting, and we have lots of plans for our future here.

Of course, there are some weird culture shock things here too, beyond the southern drawl and ‘y’all’.  I always have to specify that my tea is unsweetened, or I’m given undrinkable sweet tea. I know I have many enemies when it comes to this debate, but I like my tea bitter and pure. After more than 20 years drinking it that way, I don’t think I’ll ever accept sweet tea.

And did you know people call shopping carts ‘buggies’ here? I was a little baffled the first time I heard that one.

You know, however, that you are truly in the south when you walk into the local diner and see this:

Jesus figurines for only four quarters screams ‘Welcome to Bible Country’ if nothing else does.

I’m super excited for this next chapter in our lives, and I hope that you will keep reading! Here’s to adventure!

The holiday break has officially begun! Last night was the school Christmas pageant. Emmett enjoyed the singing and clapped at (mostly) the right places. His favorite part was probably the lollipop and orange he got from Tribal though.

He sat on santa’s lap and didn’t cry at all which is an improvement over last year. He seemed fascinated with him and would t look at the camera. I count it as a win though- the picture is super cute.
Our charter flight out of the village is scheduled to leave in 45 minutes so we are all now just playing the waiting game. The airline calls when the charter is on its way and we all bundle up and head down to the airport.

As much as I say I want to travel light I have a bunch of things Emmett has outgrown and other clothes I never wear that I’m taking to put in storage. Alas, maybe next trip. I do plan on not bringing much back other than select Christmas gifts and food. We’ll see how that goes.

I am vey excited about our flights this time though because we don’t have any layovers over 4 hours either way! This has never happened to us before and I’m super thankful. That means no hotel and no overnight which means saved money. And that always makes me happy!

Can’t wait until we touch down on the East Coast!

When my cousin contacted me about a week ago about her son’s school project I was super excited. They had read the book Flat Stanley in class (it’s all about a boy who gets squished flat, and then mails himself around so he can travel) and they were sending out their own Stanleys. She asked if I would be willing to take some pictures, and I immediately agreed. I had read the book myself in Elementary school, but never participated in a project like this. The students are going to be sharing and mapping where their Stanleys go, so it will be cool to have Alaska represented.

Check out our tour of the village with Stanley: 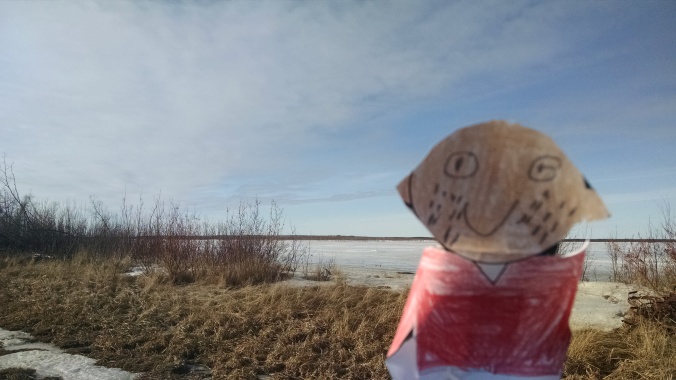 Looking out at the frozen Kuskokwim River

Checking out the fish drying 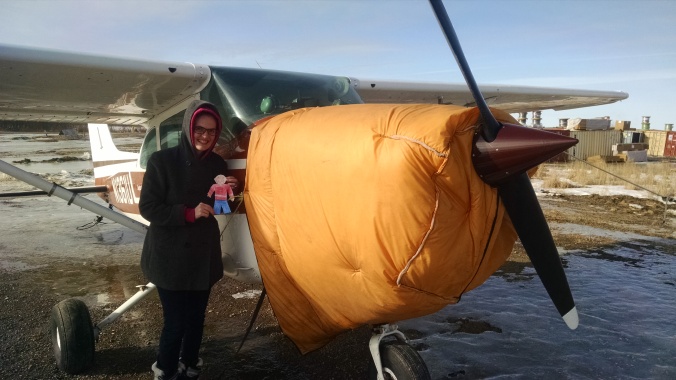 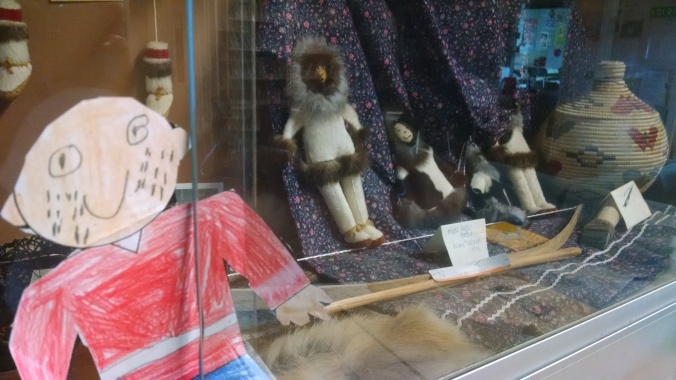 More Alaskan Handicrafts at the School

Next up, Stanley is headed to my sister in Florida- hopefully he will warm up a little bit, and maybe even see a beach. It will be a good vacation after the frozen tundra I think! 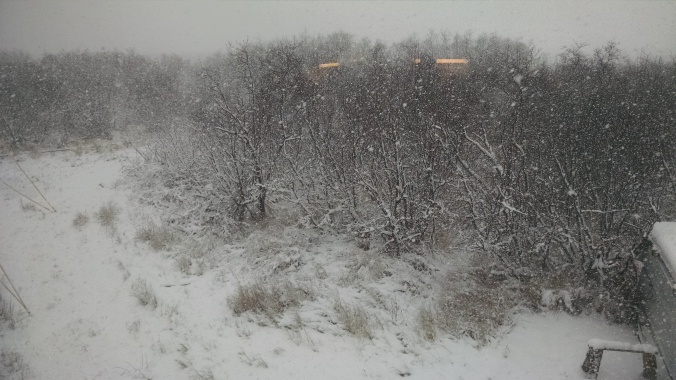 Winter has arrived in November!

Snow came to the village a little later this year (last year our first snow was in October) but this year it stuck. It is a winter wonderland, and got cold fast. The river road is open already too. Personally I prefer it this way- the constant tease of snow, only to melt the next morning in a depressing drizzle, was no fun at all. And completely contrary to my thoughts about Alaska- the East coast where my family lives was getting hit with snow and cold, while we dealt with almost constant gloom and rain. I’m much happier this year, and the cold and snow being a constant means something else great as well: caribou hunting is possible.

Last year we received a little bit of caribou, enough for a roast and a stew. I fell in love with the meat. Think of the tastiest cut of beef you can… caribou is even better than that! It is a tougher meat though, so cooking it in the crock pot is the way to go for sure.

This year, it was like we were thrown into the deep end of bush living when it came to caribou. No nicely packaged and cut piece for us this year, no. We’ve been out here now for a while- so we got to butcher our own half of a leg that a neighbor shared with us. Not just cutting, but cleaning the hair off as well 😉

So I put on some clothes that I wouldn’t mind getting messy, and dove right in! I was actually pretty excited. I have carved a chicken before, but nothing like this. 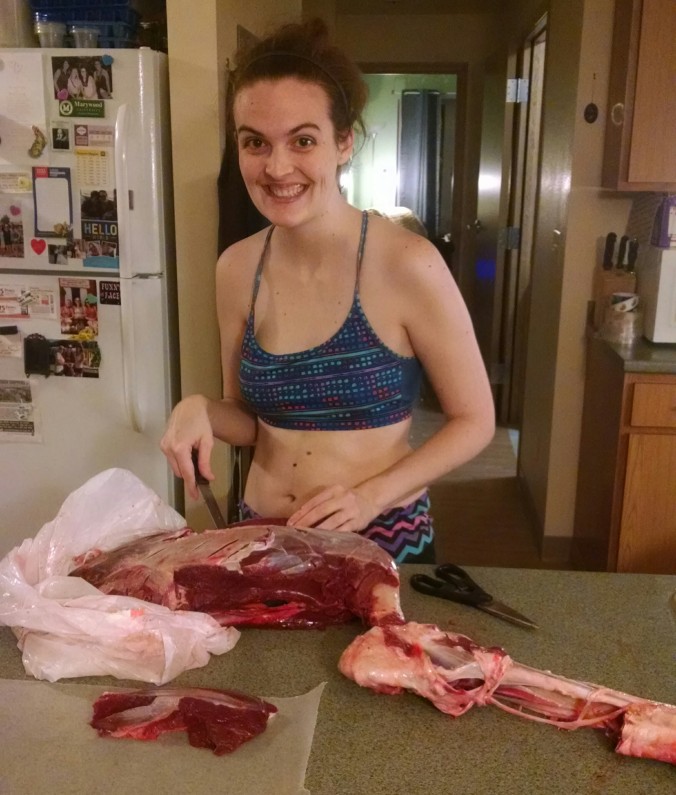 My husband was surprised that I volunteered for the task. In the past I have acted pretty squeamish when it came to gutting the Salmon. I’m not sure why but the scaly texture of the fish freaks me out, whereas the caribou leg wasn’t that bad. Regardless, he was happy to play with the baby while I hacked away at the meat.

It was a hard, messy job, but in the end it was so worth it. We now have a whole bunch of meat stored in the freezer- at least 3 pounds of stew meat and several roasts. It’s going to be a tasty year for sure!

Have you ever tried caribou? Any favorite recipes? I would love to hear about them in the comments!